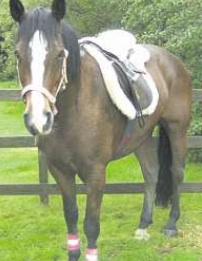 A WOMAN has had her horse returned hours after it was stolen on Christmas Eve.

Debbie Giacomet thought her 10-year old Irish sports horse, Bonnie, was safe for the night when she secured her in her stables at Bron Haul, Llangystennin.

But thieves led Bonnie away from the stables leaving her in fields about a quarter of a mile away.

Hours later police called to a road accident on Christmas Day morning discovered Bonnie and led her to the Aberconwy Equestrian Centre, where she was identified as belonging to Mrs Giacomet and returned home.

Mrs Giacomet said: “My personal opinion is that I was really lucky the police attended the accident. It’s one of those things you think is never going to happen to you. There would have been nothing worse than waking up on Christmas morning and wondering ‘Where is she?'”

Mrs Giacomet warned other horse owners to be aware of horse thieves in the area and North Wales Horse Watch has also issued an alert after several incidents over Christmas were reported to their Facebook page.