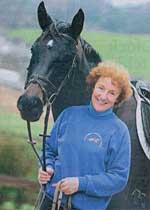 For at the age of 46 she opened a riding school at Wern Bach, her 15 acre smallholding in the tiny hamlet of Llangwstenin, near Llandudno Junction, qualifying two years later as a British Horse Instructor.

This enabled her to take over teaching at the school, which in the last 10 years under her guidance and dedication, has gone from strength to strength. Today it has a reputation for excellence that attracts students from all over North Wales.

“My aim is to improve both the quality and care of horses and riders in the area,” declares Doris. “Through understanding how a horse’s mind works, the rider will be capable of establishing a much better partnership.”

Born in the Rhineland area of Germany, she only started riding at the comparatively late age of 17, cycling 20 miles to the nearest riding establishment for lessons.

At that time she never thought of a career with horses. Instead she became a qualified bookkeeper and 4 years later came to Llandudno as an au pere girl to perfect her English.

Although she missed her parents, she remained in North Wales, marrying a local man and raising two sons.

In 1976 Doris moved to her present farm where she was able to stable her own two horses, establishing a livery yard which later was expanded and in 1993 became Aberconwy Equestrian Centre.

“I always loved teaching and it seemed a natural progression to aim to become an instructor.” says Doris.

“The decision to do this was easy, but the reality proved a lot harder as normally you would do this much earlier than in your mid forties!”

Despite being the oldest pupil to sit the four exams, she persisted and qualified first as an AI (Assistant Instructor) and three years later became an Intermediate Instructor and Intermediate Stable Manager.

Now she passes on her skills to pupils aged from six up to senior citizens. As well as having a riding school with a competition size indoor area and cross-country fence, Doris also takes in young horses for breaking and schooling.

Determined, independent and very focussed, she competes locally in dressage and show jumping on her own horse, Sultan, a 16 hand black gelding which she bred herself.

“My aim now is to make the centre the leading riding school in North Wales,” she concludes.